Diabetes remains as one of the most prevalent diseases not just in the Toronto area, but in other parts of Canada as well. This is why taking Toronto first aid classes is highly recommended not just for those who are at a higher risk of acquiring the disease, but also for those who are taking care of a patient with diabetes who is more than 65 year of age. Here are some of the reasons why.

The Prevalence Rate of Diabetes within the Elderly Population is High 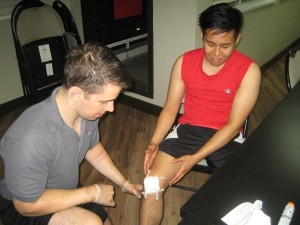 According to the Willowridge Martingrove and Richview Profile that was released regarding the adult health and disease statistics in the area, it was determined that more than 30% of Toronto-based residents who have diabetes are older than 65 years old. This number makes it the age group with the most number of Diabetes-inflicted patients. Residents who are between 45-64 years of age come in second place with more than 14%. This means that most of the people who are diagnosed with the disease in the area belong in the senior citizen age group and that meeting elderly people who are experiencing a medical crisis because of certain diabetes complications is highly likely.

The Difference Between the Elderly and Younger Patients

Another reason why it is important to take Toronto first aid classes is because taking care of elderly patients with diabetes requires a different medical approach than dealing with younger patients. One of the major differences is their reception of certain medical interventions. Studies show that the elderly are more resistant towards medications and other procedures because of the declination of their ability to comprehend and alertness. The symptoms of common and life-threatening complications of diabetes are also harder to determine for the elderly because of their decreased receptor to pain and other indicators. Some of these complications, such as shallow breathing, are also often misdiagnosed as the inevitable and normal signs of aging.

What Would Toronto First Aid Classes Do?

First aid trainees are taught how to properly determine Diabetes-related complications which allows them as well as other healthcare professionals to deliver the right medical interventions on time. Toronto first aid classes also teach trainees how to properly communicate with the elderly so that they will meet minimal to no resistance when delivering healthcare. They will also learn how to administer Diabetes medications according to the current state and age of their client which is important since elderly patients are more delicate than younger patients.