Staph infection on the knee

A staph infection is typically triggered by the staphylococcus aureus. Always bear in mind that the staph bacteria is usually present on the skin and mucous membranes and can even develop into serious health conditions, especially among those who are at high risk such as those with weakened or compromised immune systems. Once the child ends up with a wound on his/her knee and does not heal correctly, it might indicate the development of a staph infection.

What are the possible causes?

It is quite common for children to end up with cuts and scrapes on the knees throughout childhood. Most cases of minor skin injuries typically heal on their own but once they develop an infection, it requires medical care.

One of the main causes for staph infections involves the invasion of bacteria into the cut or wound in the skin. Bacteria are present on various surfaces and capable of surviving high extremes of temperature, dryness and various types of soaps. The staph bacteria can also spread from one individual to another. Staph can also be acquired via inanimate objects including clothes, towels and solid surfaces until it comes in contact with the skin or mucous membranes. In addition, an individual can carry the staph on the skin but once it is allowed to enter via a cut or wound such as the knee, the signs of infection start to manifest.

There are various types of skin infections triggered by staph including boils, impetigo, cellulitis and scalded skin syndrome. Once a cut on the knee becomes inflamed, red, swollen as well as sore and develop a pus or drains fluids or blood, it can indicate a staph infection. 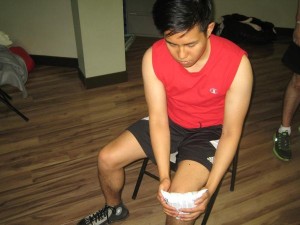 Once a cut on the knee becomes inflamed, red, swollen as well as sore and develop a pus or drains fluids or blood, it can indicate a staph infection.

Once the child has an infection on the knees that is triggered by impetigo, he/she might end up with a sore rash or blister that drains fluid and develop a crusted layer. Impetigo typically occurs close to the mouth but can spread to other areas if there is a current infection. As for cellulitis, it can occur if a staph infection from a wound is severe. This skin condition affects the deep skin layers that results to redness and swelling around the affected area.

Methicillin-resistant staphylococcus aureus (MRSA) is a type of staph infection. This is considered more serious since it is generally more resistant to most types of antibiotics, thus making it difficult to treat.

MRSA can develop in any type of wound including minor cuts on the knees. Once a child has a weakened immune system, hospitalized or undergoing cancer treatment, his/her ability to fight off the infection is affected. The complications for MRSA include infection that affects the lungs, bones and heart. The symptoms might include the following:

Aside from the reddish and swollen area in and around the knee wound, there is also difficulty walking using the affected leg.

The treatment for a staph infection is often done with a strong course of antibiotics. Most cases of staph respond well to antibiotic treatment. In case the infection is severe, surgery might be required to take away the infected bone and tissue within and around the knee region.

The MRSA infections that are severe might require drainage of the infected knee as well as the surrounding area. A combination of antibiotic treatments can be used to eliminate the infection. Medications and intravenous fluids can be given in the hospital as well as oxygenation to promote better breathing and fight off the infection.